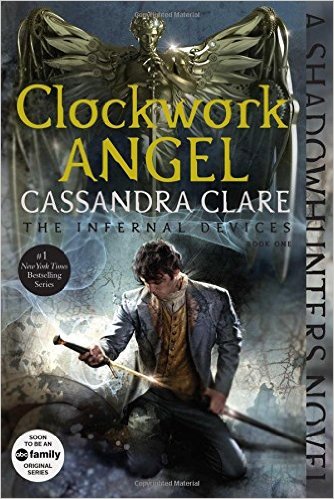 Clockwork Angel (book 1 of The Infernal Devices) by Cassandra Clare

This is a rather long, but knowing this author I will need to reference this for other books in the series.

Theresa “Tessa” Gray = main character, comes to London to find her brother, gets kidnapped by the Pandemonium Club and is Rescued by the London Institute

Nathaniel “Nate” Gray = Tessa’s older brother who sent her a letter requesting she come to London after their aunt who was taking care of her died.

William “Will” Heondale = a shadowhunter (Nephilim), member of London Institute

Brother Enoch = one of the Silent Brothers, helps heal those in the London Institute

Sophie = maid at the London Institute

James “Jem” Carstairs = shadownhunter, whose family ran the Shanghai Institute before being tortured, he survived and was sent to the London Institute

Lady Camille Belcourt = vampire, helped the Enclave, but had revenge as a personal motive

Agatha = cook for the London Institute

Thomas = servant at London Institute, not a shadowhunter, but trained like one

Gabriel Lightwood = shadowhunter, does not get along with Will (member of the Enclave)

J.T.S. = initials on the watch that Magister wanted Tessa to change into (will be important in future books)

Pandemonium Club = mundanes who have an interest in the magical arts and try to summon demons and spirits – several Downworlders have connections to the club.

London Institute = investigate crimes of the Shadow World, built on burnt down Church of All Hallows the Less

The story takes a rumble tumble start with introducing characters halfway and making the reader guess what is going on and what motives are.  At first it is confusing why the Dark Sisters have kidnapped Nate and are forcing Tessa to change, but a few chapters in the plot beings to expand.  While not all the stories are wrapped up that is to be anticipated since this is a series and not all elements can be neatly ended in this first book.

Will and Tessa have a complicated relationship/friendship develop throughout the story, and Jem plays an interesting roll in how their relationship is transitions.  Saved by Will and Henry, Tessa finds herself at the London Institute and learning about the Shadow World and her powers.  Not sure she can trust anyone, she does start to trust the members inside the London Institute, who become each other’s families, whether they want to or not.  Battles test friendship and alliances, truths are made know, but not all are told (or not all told to completion).  Through misdirection Will, Jem, Charlotte, and Tessa realize who the Magister is, but not fully what he wants from Tessa.

Tessa finds her brother, but her love for him has changed, and as Jem alludes to Nate loves Tessa as best he can, but not the way Tessa wants him to.  Nate has his own gambling problems and as many in the novel called him is a coward and a fool, unfortunately this hurts his relationship with Tessa as more of his cowardliness and foolishness comes to light.

In the end, the London Institute becomes Tessa’s home and an interesting partnership between Bane and Will is being formed.  I can’t want to start reading Clockwork Prince.

I loved this book, I read it basically in one day, and found it hard to put down.  The story moves at a good pace and the action is unpleasant, but not needlessly graphic or grossly graphic in detail.  Having read the Mortal Instruments I liked this author’s style, pacing, and character development.  I highly recommend buying the entire series so that you can start reading the next book as soon as you finish this one.  This series, while not new, will be the perfect series for this summer.  Cassandra Clare did not disappoint and I am kind of sad that I did not start reading this series sooner.