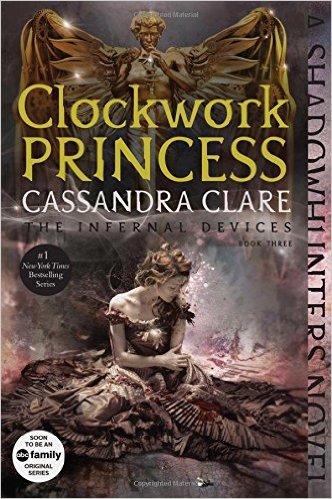 Character List:  The list is updated from Clockwork Angel and Clockwork Prince with new information added to characters that were already introduced

Gabriel Lightwood = after Benedict’s death, resides at the London Institute, Wayland asks him to spy on Charlotte

Swallows = one of the Court faeries, runs a shop

Sophie = announces her wish to Ascend and become a Shadowhunter

Ithuriel = Angle of the Devine

The ending made me happy and sad all at once, I don’t think you could ask for a better ending for the characters that developed and you grew to love over the three books.  Choices were made and lives were lived.

This book has heartbreak in many ways and cheer in just as many ways.  I am really struggling with how to summarize the book without giving away spoilers.

Will faces some of his most difficult times and it is Tessa that helps him see the good in himself.  Tessa realizes what she truly is and how her role was destined to be that of what it was since before she was born.  Sophie is tested and passes, Gabriel and Gideon Lightwood are faced with deciding family bonds over the promises made by Shadowhunters.  Cecily realizes that she cannot fake wanting to be a Shadowhunter to trick Will back home and comes to terms with what her heart desires.

Charlotte and Henry were undermined by those they thought they could trust and came out on top and with support of surprising new friends.  The London Institute is still the center of attention, but many of the Shadowhunters take a trip to Idris in a manner of speaking.

Mortmain’s plan and connections are exposed, but not believed by all until it is too late.  Tessa has a run in with a member of the Dark Sisters that leaves her confused and isolated for a brief time.  The necklace that Tessa always wears is explained and continues to protect her.  Jem faces the ultimate sacrifice, but in the end may get to live a life of what he dreamed.  Magnus is his true self and continues to amaze, I am so thankful that there is a book just on him (Bane Chronicles).

I bow down to the world that Cassandra Clare has created and am glad I read the Mortal Instrument series and can’t wait to start the Dark Artifices Series with Lady Midnight.

Now if you excuse me, this t-shirt is true and I am going into mourning.