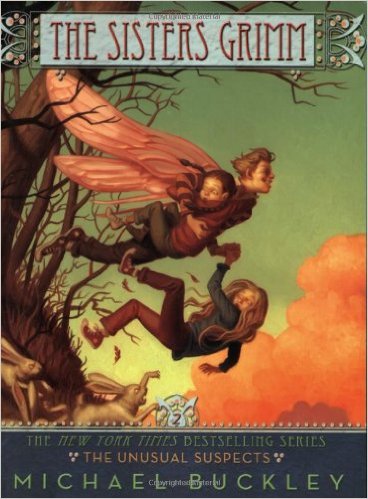 Lilliputians: the ones who broke into Gepetto’s store

Pinocchio: no one has heard from him in 200 years

Mr. Grumpner = Sabrina’s teacher, end up dead on her 1st day of school

Natalie = in Sabrina’s class, Sabrina gave her a black eye on the 1st day of school (everafter)

The Widow (Queen of Crows) = everafter from Snow Queen, warns the Grimm family of danger

Rumpelstiltskin = one of the most deranged and mysterious fairy-tale creatures, feeds off the emotions of others, and can be explosive

Picking up only a few days after book 1 ended the Grimm Family is solving another mystery for the Everafter community.  There are many shocking twists along the way, such as Mayor Charming deputizing the Grimm Family, Mayor Charming and Snow White agreeing to go on a date, and the biggest twist is who some characters really are.

I was surprised I found myself reading this book, but I must admit I like the stories that have mystical beings, or fairy-tale creatures, living alongside humans.  I really think this is a great book for young readers who might be too young to start reading Percy Jackson, Heroes of Olympus, Magnus Chase, or Infernal Devices.

The main mystery takes places after a disastrous first day of school for Sabrina when she finds her teacher dead.  Sabrina still suspicious and trying to find her parents boils anger throughout the book.  Daphne is enjoying being a Grimm and detective, which makes Sabrina even more irate.  Puck is now living in the house, and is convinced that he needs to be Daphne and Sabrina’s bodyguard at school.  Wendell is trying to be a detective too and somehow gets involved in a plot to destroy the barrier, by some surprising characters.

Metaphors for anger and racism can be made from the story, but human nature is also at its most raw in teenagers and that was captured in this book.  The bigger mystery of the Scarlet Hand and who they are is left with a huge hint and cliff-hanger.  Hints were given, such as it is not a single person but a movement.  In the end there is enough to make a reader at least consider reading the next book in the series, while also satisfying the reader about the story they read.

One thought on “Sisters Grimm – The Unusual Suspects”