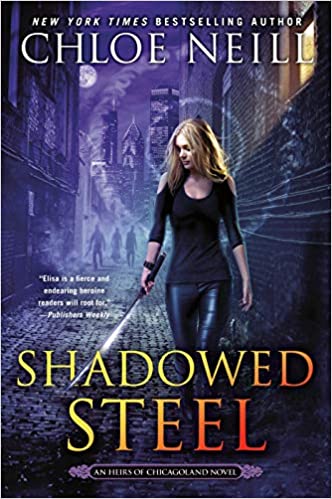 There were a few disappointments to this book, such as how long of a wait until the fourth book in this series and that Connor and Elisa stayed and fought instead of escaping on his motorcycle (which wouldn’t be there style but when the idea was teased it does make the reader wonder). The author does an amazing job of bringing the reader into a world of supernatural beings and getting you to care about them, even the ones a reader does not like. The characters from Chicagoland Vampires are still present, but are supporting cast to Connor, Elisa, Lulu, and Alexei. There are still unsettled issues, and teases at futures that makes the reader so eager for the next installment that the biggest downfall is reading it too soon to the release because then the reader is waiting a year or so for the next book.  Chloe Neill has a gift for writing and it can only be hoped she never tires of this amazing world she created and that she will continue to write about the supernatural beings in Chicagoland. This series being a must read for anyone who likes vampires, werewolves, shape shifters, and other supernatural beings is an understatement.

Elisa Sullivan = born vampire who is immortal, dating Connor, her parents are in India visiting Amil Patel when the Assembly of American Masters (AAM) Compliance Board visits Elisa for making a vampire without permission months earlier.  Faces down the Compliance Board, a stalker, starts to create her way with Connor, working on finding peace with “the monster” and does what she can to stay independent from Vampire Houses.

Connor Keene = crown prince of the North American Central Pack of Shapeshifters (NAC), bought a townhouse in Chicago without telling Elisa, is hit by a white sedan that was driven by Elisa’s stalker, tells Elisa how he feels about her, manages to stay by Elisa’s side as she faces down the Compliance Board. Forgot Berna’s birthday and has to do extra chores to earn forgiveness for it.

Lulu Bell = Elisa’s roommate and best friend, chooses not to use her magic, gets dumped and is upset that Elisa and Connor seems to be moving along in their relationship and she is feeling stuck.

Alexei Breckenridge = shapeshifter, loyal to Connor, watches over Lulu when Elisa’s stalker makes threats, has a crush on Lulu

Petra = Supernatural Ombudman’s (OMB) co-worker of Elisa, aeromancer, helps Elisa after she is suspended for suspicion of killing another vampire

Theo = OMB, former cop, Elisa’s partner, not sure he likes Connor, helps Elisa while she is suspended

Carlie = Elisa changed her into a vampire in Minnesota, Elisa is worried that her stalker may try and hurt her

Blake = AAM Compliance Board member, who is decapitated by a sword and left in the shade so that his body will be found

Nicole Heart = leader of the AAM, did not respond to Ethan Sullivan’s calls and then comes to Chicago to address the Compliance Board. Asks Elisa to promise that Elisa will not try and go after Nicole’s position.

Clive = leads the Compliance Bureau, former guard of Cabot House in NY, threatens Elisa and blames Elisa for Blake. Knows his brother has problems but makes them worse instead of helping.

Detective Gwen Robinson = Chicago PD liaison for the OMB, is aware of Elisa’s situation and after questioning Elisa does not believe she killed Blake and does not believe Miranda was attacked

Miranda Mitchell = pack member who has a crush on Connor, jealous of Elisa being in a relationship with Connor, claims she was attacked by a vampire however shifting does not heal her wound. Elisa finds out that Miranda is the one who let is spill that Elisa turned a vampire and in doing so could have put the pack and Connor in danger. Elisa lets Miranda know she is the rat.

Daniel Liu = pack member, asks Elisa about the fight, Connor has him protect/watch Elisa a few times, left Memphis due to heartbreak and is trying to find his way

Ronan = took Carlie in after she was changed, did not rat out Elisa, tells Elisa that she would have to look closer to home, and offers her protection from the Compliance Board if she wants it

Jonathan Black = attorney, half elf, tells Elisa the fairies owe her and offer his services when she is being brought in for questioning on Blake’s death, wants to be “friends” with Elisa since he just moved to Chicago.