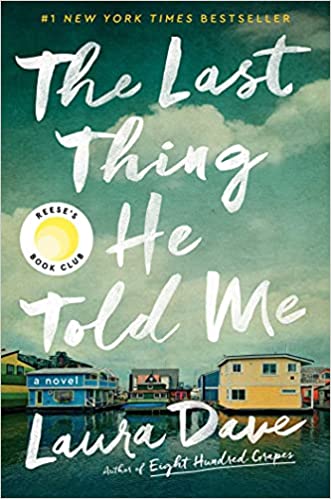 The Last Thing He Told Me by Laura Dave

This book seemed to be a short read, but I am not sure if it really was. It was a bit slow to start, but once it took off (well actually Hannah and Bailey took off for Texas) the story started moving quickly and the book became hard to put down. I bought this book as part of my Book of the Month subscription, and encourage others to consider this book because the write up does not do it justice.  The timing and the story might be a tad unrealistic at times, but it is a fun read. Hannah finds herself with a step-daughter who hates her and is trying to keep her safe when her husband, and Bailey’s father, disappears. This leads Hannah to a mob connected lawyer, the U.S. Marshall’s service and possible witness protection. The story is suspenseful, humor filled, and down right confusing at times.  I normally do a character list, but this time in keeping with the mystery of finding out true identities  there will not be a character list. Instead know that Hannah is who she says she is, but everyone else should be questioned until confirmed twice (some are and some are not who they appear to be).