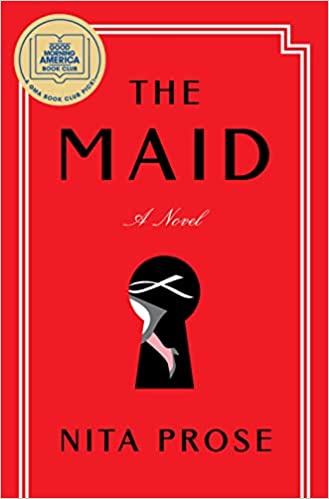 The Maid by Nita Prose

The main character, Molly Gray, appears to be on the Autism spectrum, which makes her view on the world around her different than most. Molly recognizes that she struggles to read social cues, but is learning.  Molly loves her job as a maid at the Regency Grand Hotel, because she loves cleaning. Molly follows certain rules, as she does best when she knows rules and proper etiquette to follow. Unfortunately, Molly finds Mr. Black a frequent guest at the Hotel dead and her world start to get confusing because she doesn’t react as a “normal” person would nor does she know what rules to follow. Molly turns to who she thinks are her friends, only to be let down and find out that her true friends are there watching out for her and come to her aid. With the help of Mr. Preston his daughter, Charlotte, and Juan Manuel Molly helps discover who the real criminals are and get the police off her back. The surprise ending keeps the reader engaged in the last 100 pages, and threw in a twist that even the most well read murder mystery buffs might be shocked at. For a debut author this is a great book, and many would be interested in what this author might create in the future.

Molly Gray = maid at the Regency Grand Hotel, her Gran recently died, and she has a hard time understanding social situations and cues. Knows who really killed Mr. Black, but her awkward social skills and trusting the wrong people mean the police think she is the killer.

Charles Black = real estate magnet/tycoon. Did not own the Regency. Rumors about illegal dealings and family conflict with his children trying to run the company are in the news frequently. Cheated on his first wife and his current wife too. Was rude to Molly on the day he died.

Alexander Snow = Regency Grand Hotel Manager, gave Molly the job as a maid and knows she didn’t kill Mr. Black, however after she is arrested he has to fire her.

Giselle Black = Charles Black’s second and current wife. Molly has seen the bruises from where Mr. Black beat her. Was friendly towards Molly and helped her understand social cues better. Molly knows she did not kill her husband, and agrees to help her recover her gun from the suite after the police have left.

Juan Manuel = dishwasher at the Regency Grand Hotel, is a friend to Molly. His paperwork expired and Rodney held that over him and got him to cut drugs each night in the hotel. Molly not aware of the situation thought she was helping Juan Manuel by giving him a room to sleep in each night.

Rodney Stiles = bartender at the Social, the bar inside the Regency Grand Hotel. Molly has a crush on him and misreads situations to think he is a true friend and has feelings for her.

Mr. Preston = daughter Charlotte is a partner in a law firm and he likes to brag about her. He is the doorman at the Regency Grand Hotel, and knew Molly’s Gran. He agreed to watch out for Molly when her Gran died. When Molly is arrested he calls Charlotte to help Molly out. Mr. Preston creates a plan to trap Rodney and help Molly and Juan Manuel.

Cheryl Green = Molly’s supervisor, but not a superior maid. Steals tips from other maids and cuts corners when cleaning.

Sunshine = maid from the Philippines, her son becomes a maid towards the end of the book.

Sunitha = maid from Sri Lanka, tries to warn Molly about Rodney and how there are snakes in the Hotel, but the warning does not make sense at first.

Detective Stark = the detective in charge of investigating the murder of Charles Black. Suspects Molly after Cheryl tells them about the gun Molly was hiding and the ring Molly pawned to pay rent. Apologizes to Molly for mistaking her reactions as signs of guilt.

Mr. Russo = Molly’s landlord who tries to evict her and Charlotte has to threaten him because his building is not up to code.