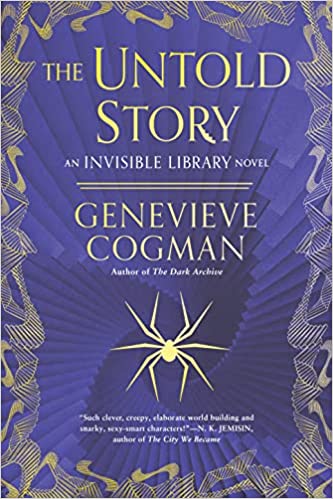 The Untold Story (An Invisible Library Novel) by Genevieve Cogman

For readers who have read the first seven books, this finale is everything you want and more. Questions are answered, mysteries are solved, and the truth is known (or as much of the truth as possible). The author did a fantastic job creating a satisfying ending for readers who have grown with these characters and rooted for their happy ending, or just for them to go away in some instances. Irene and Kai admit how they feel about each other, and Irene finds out who her biological parents are. Catherine realizes something is wrong with the Library and tries explaining it to Irene, which helps Irene solve the biggest question of who or what is running the Library. Fans of this series will find the book hard to put down, but also draw out reading the book to make this magical world last a tad longer. The only complaint is that this book is the last in the series, and new stories with Irene, Kai, Vale, and Catherine will be created in the minds of readers who do not want to let them go forever.

Character List/Book Summary:
Irene Winters = Librarian, asked questions about who her biological parents are after Vale hinted that Alberich was her father in the last book and send on a mission to keep her distracted. After the treaty signing goes wrong starts to really question who or what is running the Library and sending out missions.

Alberich = a Librarian who betrayed the Library, sends a letter to Irene through Lord Silver. Agrees to sign a treaty with the Library if Irene is there. Sends Irene on mission to find the story that set him against the Library and tells her that when any other Librarian hears the story they die. Surprises Irene by helping her at the appropriate moment.

Vale = Irene’s friend and a brilliant detective. Encourages Irene not to have violence be her first cause of action against Alberich, and to let her morals be her guide. Accompanies Irene and Kai to a treaty signing and into the Library in search of the truth afterwards.

Kostchei = Senior Librarian, he knows about Irene’s true lineage, creates a plan that Irene went rogue to try and get Alberich, but doesn’t take her off the Treaty team and does not send anyone after her.

Melusine = Library Security, in a wheel chair because she didn’t have a contingency plan. Gives Irene a contingency plan to reach her in case of an emergency. Irene uses it after reading different versions of how the Library was created. Confirms Irene’s theory

Lord Silver = Fae, asks Irene to keep quiet about Catherine being able to enter the Library and tells her that worlds are vanishing. Delivers a message from Alberich and helps put Irene in touch with the Fae who told Alberich a story that made him go mad and start his revenge against the Library.

Catherine = Irene’s apprentice, Lord Silver’s niece. Starts her studies in the Library, but leaves because something is wrong, she can see shadows in the library like a bad web and Librarians are having nightmares (Irene is too but forgets them, Kai tells her she had the nightmares)

Shan Yuan = Kai’s elder brother, knows who Irene’s father is, wants his brother’s role as Treaty Representative. Tries to convince his brother to take a position in Ao Ji’s court

Bradamant = Librarians who has not always gotten along with Irene. Tries to stop her from “going rouge” and is there when the Treaty signing goes wrong. Helps Irene fight the 3 founders of the Library.

Sterrington = Fae, Treaty Representative, sent a man to fetch Irene. Irene helped restore her health. Works for the Cardinal and is thrilled to be picked to arrange a Treaty signing between Irene and Alberich. Agrees to watch Catherine, and helps her secretly escape when the Library calls for Catherine.

Aunt Isra = Fae, wants to be a story teller, tells Irene and Kai the story that she told Alberich. This story is almost cut short by a strong power trying to silence Aunt Isra.

2 thoughts on “The Untold Story”