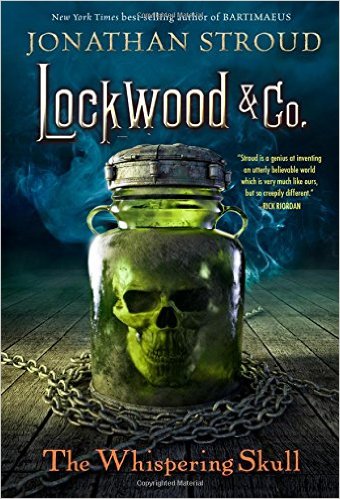 Character List:
A.J Lockwood = owner of Lockwood & Co. Investigators (can see the Problems)
Lucy = investigator at Lockwood & Co. (can hear the Problems)
George = investigator at Lockwood & Co. (does most of the research on the Problems)
Quill Kipps = Adult supervisor at Fittes
Ned Shaw = a bully and an agent that works in Kipps’s crew
Mr. Saunders = hires Lockwood & Co.
Mr. Joplin = works for Mr. Saunders and provides some research to the team
Dr. Edmund Bickerstaff = One of the “problems”
Marissa Fittes = the only person to have been able to speak to a level three “visitor”
Flo Bones = Relic woman who is friends (sort of) with Lockwood
Julius Winkman = antique dealer, owner of Bloomsbury Antiques Emporium, sells relics on the side
Jack Carver = relic man
Neddles = relic man, worked with Carver
Simon Wliberforce = friend of Dr. Bickerstaff
Mary Dulac = friend of Dr. Bickerstaff

Geared towards the young adult audience this is a fun read, when you want something silly and not serious.  The Problem is that ghosts and wraiths are coming back from the dead and bother the living of all ages, but only teenagers and children can see them or hear them specifically.  The team consists of Lockwood, Lucy, and George who live and reside in Lockwood’s childhood home, and suspiciously his parents are not around.  The stories are told from Lucy’s point of view.  This independent team is often competing with the bigger investigator houses The Fittes Agency and The Rotwell Agency.
The introductory section does a nice job reminding the readers what happened in book 1 Screaming Staircase and what the relationship of the characters is and what the “Problem” as the book calls them are.  Starting off with conflict between Lockwood and Kipps sets the stage for a challenge and hints at problems and motivation between the two of them and their crews.  Lockwood & Co. are hired by Mr. Saunders who is cleaning up a cemetery in London when he and his investigator, Mr. Joplin, find the grave of Dr. Bickerstaff and the main case for the book is set.  A parallel plot is the skull in the jar that only Lucy can hear talk, but that George, in his quest to understand why the problem started, conducts experiments on to try and get it to talk to all three of the crew.
As the Lockwood crew starts to search for answers to Dr. Bickerstaff’s stolen body and missing artifact the mystery really beings.  The challenge with Kipps is based around this mystery, as it is the main story in the book.  Lucy is talking to the head in the jar, who claims to have known Dr. Bickerstaff, but also whispers doubts into Lucy’s mind.  The head in the jar tells where a clue to the mirror’s power’s might be found, and the crew decides to see if the head is telling the truth.  Lockwood leads his crew into questionable situations and conflict arises between him and Lucy.  As Lockwood & Co. go about trying to solve the mysteries they wind up in trouble.  The ending of the book provides a nice closure to this book and potential mystery or connections to the next book.

One thought on “The Whispering Skull (Lockwood & Co)”