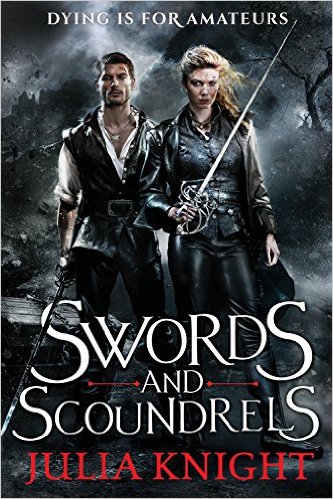 Swords and Scoundrels by Julia Knight

Review:
The book got off to an awkward start, and was a bit confusing.  Sticking with the story it got better and within the eight chapters there was many paths this story could go and plot lines being laid.  The main characters are brother and sister and they have gotten in trouble with the Duelist Guild, which is a mystery of the exact reason why but what was done is told.  Vocho and Kacha are trying to survive and come across an unknown object that is when the main plot begins.
Halfway through the book, you start to see all the subplots starting to merge together and the backstories are really starting to make sense in the present.  It is hard to predict how things will be resolved or what plot twists might be.  Guesses and predictions can be made based on the information that is revealed about Eggy, Kacha, and other characters.  Still not sure who, other than Vocho and Kacha, are going to be major players (and how so).  The mystery is what keeps me reading and the clues being dispersed through current and “interludes” that happened as far back at 18 years ago is interesting.  At first the Interludes were confusing and seemed oddly timed, but by chapter twelve the pattern is starting to make sense and adds to the character development.  I like that the Interludes are titled and time frame is clearly given at the start of the chapter.  While I don’t enjoy this method in every book I read it is beneficial and has become enjoyable as it gives character development and background on the subplots and motives.  By the end of the book it seems like everyone’s motives have been made clear and what their original plan is.  There seems to be several with people similar goals, but different ways to do it and reasons for achieving those goals.  New teams appear to be forming and alliances seem shaky for a few.  One thing seems certain, by the end of the trilogy the Prelate will be overthrown and the Guild will have to make changes.
The ending of the books just kind of stopped.  There wasn’t a cliffhanger just plot lines left unresolved and the characters have just learned new information about other characters.  I am thankful I have ordered the second book in the series,Legends and Liars (The Duelists)

, because it really does just seems like the decision to end the book was made based on size of the book.

The series seems interesting and I may read other books by the author, because I liked how real the characters are.

One thought on “Swords and Scoundrels”