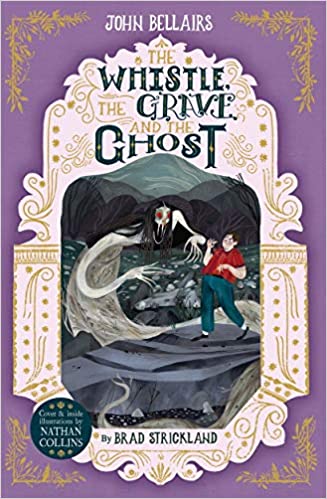 The Whistle, the Grave, and the Ghost by John Bellairs and Brad Strickland

While on a scout trip Lewis stumbles upon a grave with Latin writing and finds a whistle nearby. After returning home Lewis is not thrilled with the new priest in town, Father Foley, feeling he is singling Lewis out. Father Foley is suspicious when Lewis asks Father Foley for help with a Latin word that is on his whistle. At the next scout meeting Lewis is about to get beat up and uses the whistle to scare two boys off. Lewis starts to get a bad feeling, especially since the whistle disappears and only appears when Lewis is in trouble. Turning to help Lewis asks his Uncle Jonathan, Mrs. Zimmermann, and best friend Rosa Rita about what is happening to him. With time running out the team realize that an ancient spirit is trying to break free from her prison. Father Foley offers some surprising news that allows the team to defeat the spirit and set Lewis free from her curse. Lewis may get bad feelings about many things, but when he gets a bad feeling and Mrs. Zimmerman can’t sense magic it seems that there is in fact bad magic happening. The series is enjoyable with the foursome starting to trust each other more and dividing research into events.

Lewis – 13 years old, a scout, knows how to pitch a tent. Finds a grave while camping with the scouts and a whistle with Latin writing on it is nearby. Blows the whistle he found when he is about to be beat up by the bullies in his scout group. After the second time he blows the whistle the two bullies are hospitalized with a strange illness and Lewis starts to feel worse too.

Jonathan – Lewis’s uncle, a magician, and wealthy due to investments he has made. Tries to help Lewis with Father Foley, by making a donation to the church. Tells Lewis and Rosa Rita about deep magic when Lewis keeps getting upset he tries to figure out how to help Lewis.

Mrs. Zimmermann – good witch, Jonathan’s neighbor, and good friend. Casts a spell to see if the grave is evil, but does not see anything dead that is haunting the grave. Calls in a favor to get a special book that might help save Lewis.

Father Foley – new priest, becomes curious when Lewis asks him what a Latin word means. Has a secret connection to the Lamia and reveals it to Jonathan when Lewis goes missing.

Rosa Rita – Lewis’s best friend. Tries to help translate the Latin on the whistle and helps Mrs. Zimmermann and Jonathan research how to help Lewis.