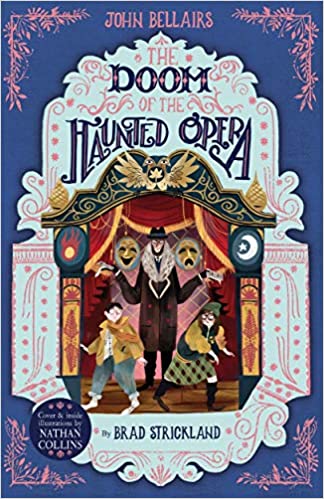 Jonathan and Mrs. Zimmermann are in Florida handling the estate of a dear friend who had once defeated an evil wizard who wanted to control the dead. With the magicians of the town under a spell and unable to help Lewis and his best friend Rosa Rita must try to figure out how to stop the evil wizard from once again attempting to cast his spell and rule the dead. Lewis feels as if he is to blame, because he found the music for the opera when he and Rosa Rita were looking through the old theater in town for a school assignment. Lewis and Rosa Rita learn from Mrs. Zimmermann that New Zebedee is a magical hot spot of sorts and even magicians that can get a spell right ever can get a little boost from being in town. It was nice to see Lewis face some of his fears and Rosa Rita be the one who wasn’t sure about what to do at times. However, both of these teens are at their best when they are working together. This series leaves the reader eager to start the next book.

Lewis Barnavelt – 13 years old, who cannot join his Uncle in Florida due to school. Working with Rosa Rita they research the old opera house in town, above the Feed and Seed, for a school report on historic places in town. A ghost appears to Lewis and warns him to be ware of the Opera of Doom. Lewis does not think the opera is good music and has a bad feeling about Vanderhelm. Is a worrier by nature, but overcomes parts of his fears to try and stop Vanderhelm from taking over the town and the dead.

Rosa Rita Pottinger – Lewis’s best friend, a bit of a tom boy. Enjoys spending time with her grandfather, which is why she agreed that the old opera house is a good project, because her grandfather helped design it. Agrees with Lewis that something is wrong with the adults in town after Vanderhelm arrived and school closed so people could participate in the opera.

Jonathan – Lewis’s uncle and guardian. Goes to Florida for two weeks to settle the estate of his friend and former President of the Capharnaum County Magic Society. Jonathan put a spell on Jailbird (a cat) so that instead of meowing he sings songs. Eclipsed the moon to be able to join the Capharnum County Magic Society, and is now their treasurer.

Mrs. Zimmermann – a good witch, specialist in talisman who loves purple. Lives next door to Johnathan and Lewis. Goes to Florida with Jonathan. Hears a radio news item about how New Zebedee got lost in a fog for several days and decided they must head home early.

Lucius Mickleberry – New Zebedee’s leading sorcerer until he retired to Florida. Left Jonathan all his magical items, since his family does not know he is a wizard. Had been a weather magician, and defeated Vanderhelm once before with the help of the Capharnum County Magic Society. Then placed a protection spell on Vanderhelm’s items, this spell was lifted when he died.

Hannah Holtz – comes twice a week to Jonathan’s house to clean. Stays for the few weeks that Jonathan and Mrs. Zimmermann go to Florida so that Lewis can stay in school. Is invited by Vanderhelm to try out for the opera and starts spending all day at the practices for the opera.

Albert Galway – Rosa Rita’s 90 year old grandpa on her mother’s side. Designed the opera house, after being a solider. Was away when the fog blocked people in or out of town, and when the fog lifts he thinks there was something suspicious happened.

Mr. Pfeiffer – owns the Feed & Seed and 5 and Dime that is the bottom of the New Zebedee Opera House

Immanuel Vanderhelm – his opera had a run of bad luck and he disappeared on opening night. “Disappeared” from a photo Albert Galway had with him. Lewis knows that “Henry” is really Immanuel, claiming to be Immanuel’s grandson. Cannot spill blood before his spell his complete. Puts a magical fog around the town and all of the magicians he knows about in town.

Mordecai Finster – theater manager who disappeared shortly after Vanderhelm. Was the ghost that Lewis saw. Lewis called on him when Immanuel put him in a secret trap door, and he helped give Lewis an idea how to get out.

Ophelia White – Lewis and Rosa Rita’s music teacher who starts to play the opera they found.

Zenobia Weatherly – President of Capharnaum County Magic Society, when Lewis and Rosa Rita try to go to her for help, they discover that the fog has made her house disappear.

Mildred Jaeger – a magician who always messed up spells and was not able to join the Magic Society, so Vanderhelm’s spell did not impact her. She agrees to help Lewis and Rosa Rita, and realizes that something is wrong in the air. Is able to cast a spell that helps Rosa Rita talk to Mrs. Zimmermann who tells Rosa Rita and Mildred what to do to let her and Jonathan into town. Helps try and stop Vanderhelm along with Lewis, Rosa Rita, Jonathan, and Mrs. Zimmermann.