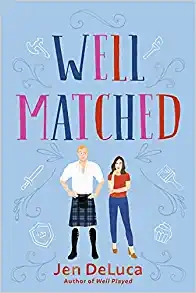 This adorable romance takes so long to finally happen, because April is so determined to protect her heart after a failed marriage left her a single mom to a new born. Now, April’s daughter is about to go off to college and April’s habit of protecting her heart almost costs her a great love. Mitch tries hard to help April let him into her heart and then it all goes away when April gets scared. Of course, April and Mitch have a happily ever after, but it is the getting to that point that makes the store worth reading. April fakes being Mitch’s girlfriend then Mitch comes to April’s rescue when her ex-husband shows up. A fun read, and if you are going to a Renaissance Fair, or love them, this is the perfect book to read as a Ren Fair is the backdrop for most of the book.

April Parker – just turned 40, leg shattered in a car accident 3 years ago (she is self-conscious about her scar). Asks Mitch to help her get her house ready to sell, once Caitlin leaves for college, in exchange for faking being his girlfriend. April starts to rely on Mitch and that scares her since she has been on her own for so long.

Mitch Malone – gym teacher and baseball coach. After helping April get rid of a jerk at the local bar he asks April to fake being his girlfriend for a family dinner, in an effort to get his family to take him more seriously. Mitch agrees to help April and even makes suggestions. Mitch tries to get April to feel comfortable relying on him.

Caitlin – April’s daughter, is upset that her mom wants to sell the house she grew up in. Invites her father (who never contacted her for 18 years) to come to graduation after he writes a letter to her.

Emily – April’s sister, which is how April and Mitch know each other. Manages a books store and coffee shop. Helps April and Caitlin during a rough patch.

Simon = runs the Ren Fair (fundraiser for the school). Emily’s husband and English teacher, which is how he knows Mitch.

One thought on “Well Matched”