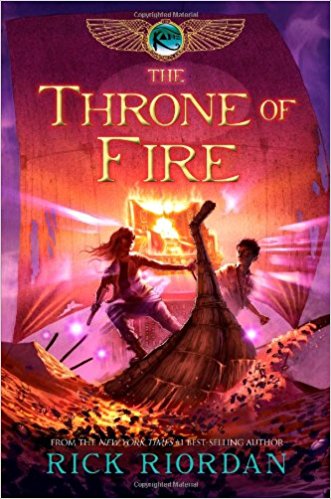 Throne of Fire by Rick Riordan

Carter and Sadie Kane are now training other godlings and have only 5 days to save the world from Apophis from rising.  Only a few months have passed since the ending of The Red Pyramid, with new characters coming into play and hints at what the third book will bring.  Carter and Sadie are tasked with the Delivery of Ra to the throne so that Apophis will not rise, the problem Ra was forced to retire by Isis and most gods think he is senile.  That challenge along with the normal challenges the Kane siblings face create a compelling read.  Carter and Sadie even joke about how things never go there way, and luck is never on their side.  New Gods are introduced along with new godlings as this adventure plays out, and everyone involved makes this a world you want to be a part of (even if it means possible death).

Rick Riordan is a great author and gives nods to other series in this book, and does so in a way that works without seeming forced.  You do not need to read the Percy Jackson series to get the nods, because they are subtle enough for his fans to recognize; meaning they will not take away from the story for someone who has not read them.  The author’s trade mark humor comes across in chapter titles and in how his characters interact.  I am eager to start the next, and final book in this trilogy.

Carter = has 5 days to wake Ra, Horus tell him where to get the 1st book of Ra, he realizes that he is not an “add on” for how Bast takes care of Sade and that she really cares about him, is heartbroken about Zia

Sadie = wants to see her friends and grandparents for her birthday, has a crush on Walt, is tempted by Isis, separates from Carter for a few of the challenges along the way on this adventure and realizes she knows more than she thought

Bast (God of Cats) = remembers Sadie’s birthday when it appears others may have forgotten, goes to check on Apophis’s prison, has a friend come and help watch and protect Sadie and Carter

Jasmine “Jaz” = trainee, cheerleader from Nashville, nice to everyone, talent for healing magic, calls to Sadie’s ba when she is close to death

Walt Stone = trainee, 14, tall, from Seattle, charm maker, born unusual, likes Sadie, his secret is revealed towards the end of the adventure and he might be important in the third book

3 Aspects of Ra = Khnum (ram headed god at sunset, forgot his ren name, guards the gates to the 4th house of Night), Khepri (the scarab god in the mornings), & Ra (Sun God during the day)

Sekhmet (Goddess of Destruction, plagues, and famine) = healers learn to control her forces

Zia Rashid = asleep at the Place of Red Sands, Iskander put here into a magical sleep and hid her, host of Nephthys, doesn’t remember Carter when she wakes, becomes friends with Sadie

Michael Desjardins = Chief Lector, wants to consider peace with the Kanes, unsure if Carter is telling the truth about Menshikov

Felix = trainee, 9, loves penguins and tries to use them to solve problems

Freak = griffin, Carter keeps at 21st Nome after an adventure

Anubis (God of Funerals) = Sadie has a crush on him & it is mutual, tells her to go tot he 18th Nome to get the 2nd book of Ra

Bes (Dwarf God) = who Bast & Anubis send to help/protect Sadie and Carter, had been prisoner of 18th Nome, has a crush on Bast, believes in the Kanes, cares for Tawaret

Amos = Carter and Sadie’s uncle, comes back from 1st Nome for Sadie’s birthday and help train the new Godlings, 2nd most powerful magician

Set = has a deal with Sadie & another magician because they knows his real name, Sadie releases him to know the location of the 3rd scroll of Ra

Isis (Goddess of Magic) = knows Ra’s secret name, forced him into retirement so her husband could rule

Ptah (God of Craftsman) = also God of openings, comes to help Sadie and Walt in a tomb

Tawaret = nurse at Hose of Rest, protector Goddess, dated Bes, is a hippo

Khonsu (Moon God) = has a penthouse at the Luxor in Vegas, plays a game for time with Carter, Sadie, and Bes

Heket (Frog Goddess) = in the House of Rest, people have been forgetting about her

Onuris = Mekhit’s husband, got forgotten by mortals and disappeared

OF NOTE: A Nome is basically provinces in the world, here are the ones mentioned in this book (as it may be needed in book 3)

1st = Long looking, only can enter at Sunset (this is where Carter & Sadie get on boat)

4th = Carter and Sadie met Khum and have to give his ren name, there is a Lake of Fire, Sunny Acres/The House of Rest there

7th = Aaru is there (Egyptian afterlife/paradise), so are Carter & Sadie’s parents, House of Osiris

8th = 8 massive snakes on the stone gate, House of Challenges only entered during the 8th hour

One thought on “Throne of Fire”