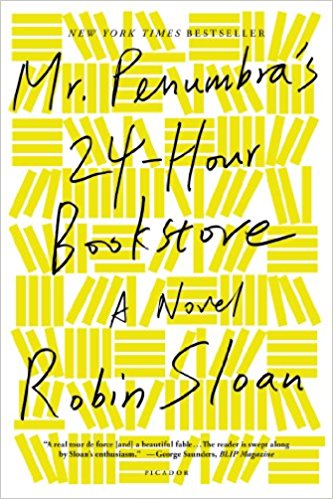 This is the perfect summer book, a mystery that is not about death or anything heavy.  All the main characters are uniquely quirky and lovable.  Being a Passenger on this journey to solve the mystery of the store, the founder, and the message was absolutely enjoyable.  Bonus – there is a special quality of the paperback cover, you need to see it in the dark to find out what it is.

Clay takes you through a cast of diverse characters that each have a special ability to help solve the mystery.  Edgar calls him resourceful, but Clay realizes his ability is to bring the right group of people together to get a project/mystery completed/solved.  The epilogue gives a short wrap up to let you know the main characters as do most of the supporting characters have a happy ending.  The enthusiasm of several characters can be felt through the pages.  The love of a good mystery bring this diverse cast together and carries them through to the end with Clay and Mr. Penumbra leading the way at various points through the story.  One mystery remains for me, who is Grumble?  I had hoped it would be revealed as one of the side characters, but alas his true identity is never revealed (which means readers can believe it is whatever character, or non-character, you want).

Clay Jannon = former employee of New Bagel in San Francisco, now night clerk for Penumbra’s bookstore, starts recording in Narratio IX, creates codes to track the Waybacklist members and their purchases, solves the Founder’s riddle with the help of his team, as he travels across the country to solve the mystery.  (unbound)

Neal Shah = Clay’s best friend since 6th grade, runs his own company called Anatomix, buys a book from Penumbra’s store, wants a membership in Penumbra’s Waybacklist group, becomes the “warrior” in the mission to NYC. (unbound)

Mr. Ajax Penumbra = cusotidan of the bookstore, sells used books, only one who can buy books, keeps records of all purchases and members appearances when they buy books.  (bound)

Matthew Mittlebrand = Clay’s roommate, works on special effects, buys a postcard at Penumbra’s, takes photos of Penumbra’s shop to help it be turned into a 3D model.  Helps Clay create a duplicate of a logbook so that Clay and Kat can scan it in at Google.

Ashley Adams = Clay’s roommate, account executive at a PR agency, seems almost robotic in routine and how she likes things.  Eventually, starts a relationship with Matt.

Kat = finds Clay’s coupon, fixes the bug in his 3D model of the store, wants to be a PM at Google where she works (unbound)

Aldus Manutius = one of the first publishers, right after Gutenberg, Teobaldo to his friends

Griffo Gerritszoon = who Manutius gave the code to, made a famous font that is very exepensive

Edgar Deckle = special projects at FLC, used to be in San Francisco now guards the door to the reading room in NYC, agrees to help Penubmra, Clay, Kat, & Neel

Grumble = hacker with a website that helps Clay with his coding needs, and personally helps Clay get his hands on a collapsible scanner.

Igor = works for Neel, very smart, recruited to help with the mission once the team is back in San Francisco

Greg = student of Penumbra, works at Google with Kat and recruited to help with mission once the team is back in San Francisco (novice)