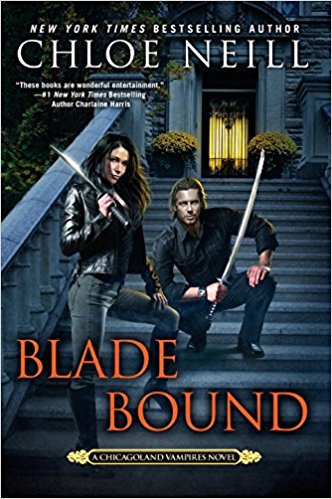 This books was such a bittersweet ending to two of my favorite characters.  Merit is the vampire I wish I could be, and I am heartbroken that I will not be along side her for more adventures.  I have high hopes for Heirs of Chicagoland, even if I have to wait a year to read it.  The love that Ethan and Merit have for each other and their realistic ending (well realistic for their world) gave great closure to their tale.  I was happy that so many characters made an appearance at their wedding and during their adventures.  It was a nice way to send this series off.  Heartbroken that I will not be fighting along side Merit, Ethan, Mallory, Catcher, Jeff, Lindsey, Luc, Jonah, and so many others any more, but happy that I had so many adventures with them.  The adventure was broken up with comedic moments, like Merit finally learning Ethan’s nickname for her or Merit singing 80’s pop to Mallory to block out other chants.  This author has done a phenomenal job of creating a world I wanted to be real and could easily get sucked in to each time I picked up the books.

Merit = vampire, Sentinel of Cadogan House, marrying Ethan Sullivan, has to pass a test and have magic help her to carry a baby that Gabriel predicted would be in her future

Ethan Sullivan = vampire, Master of Cadogan House, took his name from news anchor and Aaliyah’s suggestion, marrying Merit, uses politics for the best when supernatural events are mishandled by the Mayor and other human agencies

Malik = vampire, Ethan’s second in command, married to Aaliyah (she is a writer who keeps to herself)

Mrs. Bly = has a human nephew she wants to join Cadogen House

Mallory = magician, Merit’s best-friend, married to Catcher, stopped Sorcha Reed before, feels something off in Chicago but doesn’t know what, is very tired, decodes a special grimoire

Catcher = magician, married to Lindsey, enjoys Lifetime Movies, does not like the Order, works with Chuck Merit, helps Merti and Ethan figure out how to fix supernatural problems, trained Merit how to fight with a sword, makes a special sword for the final fight (it ties into the title of the book)

Sorcha Reed = sorceress (untrained), caused trouble 4 months ago and then escaped, now seeking revenge on what she feels was taken from her by Merit and Mallory, creates a mess in Chicago

Winston Stiles = vampire, attacks Merit after gaining access to Cadogen House because of delusions that he is having, Merit and Ethan talk to him after he recovers, he came to the house looking for a job, lets Merit have the drawings of what the voices he hears look like

Jonah = vampire, captain of Grey House (Scott is their master), Merit’s partner in the Red Guard, Merit is trying to set him a Margot up

Logan Hill = vampire, attacked Merit and left her for dead (Ethan then turned her) works with Sorcha, in a supernatural jail

Amit = most powerful vampire in the world, Ethan’s best man

Shay Templeton = top Chicago wedding photographer, Merit’s photographer for her wedding night, ends up seeing a riot when she finishes taking photos of Merit and Ethan

Lacey Sheridan = vampire, Head of San Diego’s Sheridan House, wanted Ethan to be with her

Paige = sorceress, in a relationship with the Cadogen House Librarian, both are at a conference when the issues happen

Al Baumgartner = Leader of the Order (Sorcerers’ Union), who the Mayor turns to when trying to fix/stop Sorcha, has an ego and is not willing to listen to Merit and Mallory when they say they know what Sorcha is trying to do and how powerful she is

Mayor Kowakyzk = Mayor of Chicago, does not always have a favorable opinion of supernatural beings, basically hands Chicago over to the National Guard when Sorcha’s plan goes big and Baumgartner’s plan to stop her didn’t work

Stephen Patton = kid who fell overboard, landed on ice, Merit goes to save him

Seth Tate = angel, good magical twin, Mallory split him and Dominic (evil twin) again when she used her dark magic, in the supernatural jail to pay from crimes he did commit and be close to his niece Regan (who is magically enhanced)

Claudia = Queen of the Fairies, gave up her magic to save Dominic, regained her magic to see Green Land, unsure of how long that magic lasted

Portnoy the Ugly = wrote the Danzig Manuscript, written in the 17th century

Paxton Leonard = helps Merit get documents from U of Chicago library, knew her from when she was a student, Amanda finished her 1st year of med school, Merit promises him a meeting with Mallory for helping

Taylor = Merit, Ethan, Mallory, and Catcher save her and her dog from the Egregore