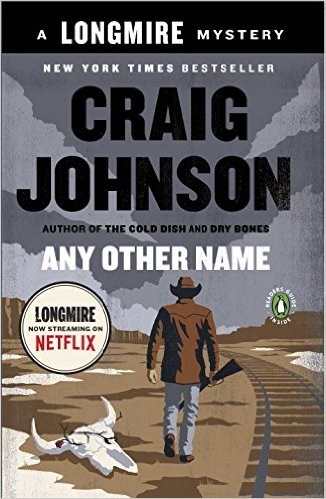 Any Other Name (A Longmire Mystery) by Craig Johnson

Connie = Phyllis’s daughter, had a drug problem (aka Isadora Duncan/Izzy)

Gerald = Helped Lucian when no one else would, dead, Phyllis’s husband (aka Gerry)

Linda Schaffer = did karate, missing person Gerry was working on, married and had a son

Cady = Walt’s daughter married to Vic’s brother and pregnant with her first child, baby is in a difficult position

Emil Fredriksen = Chief of Deadwood Police, Travis’s boss, has a reputation for fighting

Deke Delgatos = man with Roberta, been to prison, hired hitman

It was interesting seeing Walt out of his county and in another state, Walt and the characters remained true to themselves even away from their home environment.  This was one of the best things about the book, the author brought you to a new place but the characters were the same ones you have grown to love over the first 10 plus books and novellas.  Walt always sticks up for the person who has been wronged, or hurt, and will risk his life to find them or bring them justice.

Lucian is more of a comic influence in this story, but his role is vital non-the-less.  Henry and Vic balance Walt out and together the team is able to solve the mystery of the missing women and why Gerry killed himself.  Along the way you meet new characters and learn about the area.  South Dakota in the winter is one place I would never want to be, but thanks to Walt, Henry Standing Bear, and Travis I have been there.  It is also nice that characters like Virgil make repeat appearances and characters mentioned in passing are fleshed out as the series continues.  Each character has a background and each background it multi-dimensional and influences actions in the present.

The ending of who has hired the hitman on Walt is such a spoiler that I can’t say it, but once you read it the desire to start reading Dry Bones will overcome the reader.  Vic is recovering from her injuries from the last book, and dealing with that ever so briefly is Vic’s way.  Cady’s pregnancy and early delivery is a great reason to push the story along, without being fake and creates a sense of urgency when needed.  Walt finding a way to get things done even if it means bringing in Dougherty from a department he doesn’t run to help a second department (that he doesn’t run either) shows that he will always take charge to solve problems.

Overall, I can’t say enough about this series, how wonderful it is, how amazing the author is and why you should read this book.  If I start talking about the book I would end up spoiling the book, because it is too surprising and fun to find out about the small things that happen along the way that lead up to the ending.

Also, if you ever have the chance to hear Craig Johnson talk about one of his books or tell stories, YOU MUST GO SEE HIM!!!!!!!!!!  I think part of why Longmire is such a great series is that the author is just a great story teller and realizes that characters grow and evolve from the events in the books and from their lives before the books started.  Mr. Johnson does the best job and giving you enough to imagine this world that Walt lives in and expanding it each time you read one of these mysteries.