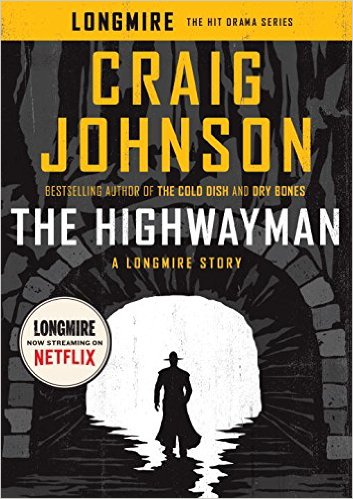 The Highwayman: A Longmire Story by Craig Johnson

Characters: (in addition to ones listed in previous Longmire posts)

Kimama Bellefeuille = Arapaho medicine woman with a Shoshone name, has a secret connection to Rosey and Bobby

Mike Harlow = had Rosey’s route before her, retired at south end of canyon, Bobby was his training officer

Bobby Womack = dead, the one who Rosey is getting officer in distress calls from, first Arapaho highway patrol

The author is upfront about how this is his version of Charles Dickens’s The Signal-man.  This is a great take on a story that makes you rationalize the chance of realms connecting and overlapping, or confirm your belief that those things are possible.

Walt is called by Henry, because she is getting officer in distress calls from a dead highway patrol officer, Bobby Womack.  Worried that one of his officers has gone crazy, Rosey’s boss wants her to have a psychiatric evaluation, not sure if she is crazy Rosey calls Walt to help.  Walt comes down and brings Henry with him to help solve this mystery.

Two mysteries end up happening in this story, who is calling Rosey? and where are the silver dollar hot-lips?

A short read, with great character development, this is sure to make Longmire fans happy.  I was able to read this in one day, as it is approximately 180 pages.  I liked that the only characters that were a known commodity are Walt and Henry.  The book does a great job at expanding the world of Longmire while not diminishing the main cast.

A happy surprise is how everyone is staying true to themselves while growing (like the real world) and small friendships or working relationship can be examined in these novellas.

One thought on “The Highwayman”