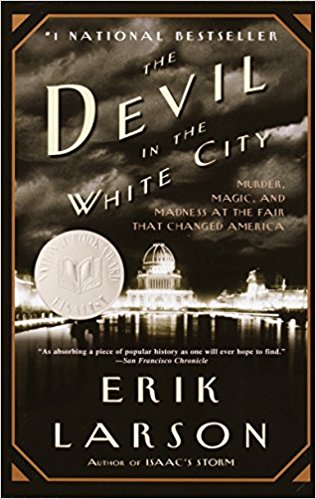 The Devil in the White City by Erik Larson

This non-fiction novel is compelling for two reasons, the first being the World’s Fair of 1893 and the second for how well written the author tells this story.  Yes, there is the talk of the serial killer H. H. Holmes that was interwoven into the narrative that tells how this fair came to life against all odds.  I bought the book for stories of the killer that I kept hearing about while visiting Chicago earlier this summer, however the book really did show why the World’s Fair of 1893 was so amazing.

With the country at the start of the Great Depression, a fair that brought people from all over the world and the country was an astonishing accomplishment.  Behind the scene the turmoil and disasters made the fair a much more compelling read than that of Holmes and his hotel of horrors.  Holmes, became a minor story to me as the fair and all that was fought against to make it happen and turn it into a success was far more interesting.  Yes, history lovers will enjoy reading this as the behind the scene arguments, tragedy, and triumphs are not what is widely known about the fair.  The ending of the book it like the ending of the fair, you don’t want it to happen and you wish to know more about the individuals you have grown to care about.

As the saying goes “you can’t make this up” the truth was a more compelling read than I think fiction ever could have been.  What makes this book so much fun to read is that you almost cannot believe that it really did happen, underdogs winning always the threat of failure lurking nearby and ultimately triumph of the good in humanity and the world is displayed at the fair.

I think the author, Erik Larson, does an excellent job at telling the real events in a narrative that is hard to put down.