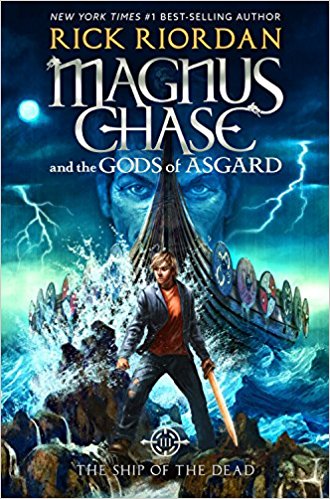 The Ship of the Dead by Rick Riordan

It is amazing to me how when you are going through life changes you can find comfort in fictional characters and favorite authors.  This was the case with this book, I started it when I was starting a new job, had to take a quick break from reading, and finished it when I was having some stressful times.  The author has a gift for making characters just accept each other and promote kindness to all.

Magnus realizes the best gift he has is his friends and family, because they accept each other for who they are faults and all.  The journey is fraught with individual danger, that brings our the hero in the entire cast.  The story comes to a nice close, but leaves me worried for what will happen in another series.  The quest is as funny as it is adventurous, and the personalities of the group on Floor 19 create a perfectly balanced team.

I am sad this journey is over, but thankful that this author leaves the door open through cross overs with other series, and the hint at one giant collaboration mentioned as a possibility in one of the series.

Magnus Chase = agrees to challenge Loki to a Flyting, has a crush on Alex, cousin to Annabeth, Percy Jackson tries to help train him for the water journey

Percy Jackson = son of Posidon, Demigod, tattoo of trident on the inside of his forearm and letters SPQR below it, gives Magnus words of advice on how to handle his journey and tries to help train him to fight in and around the water

Alex Fierro = transgender child of Loki, family has a background in pottery and is wealthy, creates a clay warrior for one of the quests and names it Pottery Barn, favorite colors are pink and green

Samirah al-Abbas = daughter of Loki, Valkyrie, fasting during the quest because it is during Ramadan, has a connection to horses (which comes in handy when guarding the ship and for an escape route), engaged, working with Alex on how to defy her father, Loki

Hearthstone = deaf, good with ruins, an Elf, has to face his dad one last time to get a key piece for the main quest, the group of Floor 19 has learned ASL (American Sign Language) to speak to Hearth

Blitzen = into fashion, owns a store in Boston, makes chainmail fashion for the gods, cannot be in sunlight, loves to wear a scarf, is brave and a dwarf

Amir = Samirah’s love, he is engaged to her, brings food for the group when they start the quest

T.J. = Tomas Jefferson Jr., never gets flustered, sunny disposition, gets a permanent wound in a fight with a giant on the journey, cannot deny a challenge due to who his father is, this is what caused his death during the Civil War (he was singled out and challenged by a Confederate solider)

Mallory Audrey Keen = does not trust magic because she blames it on getting her killed, her mother is Frigg, Loki taunted her into planting a bomb and she died trying to stop it when she realized it was a mistake, this hatred of Loki helps drive her on the journey, Magnus gives her a nickname and it sticks, like Halfborn but fights with him, keep the walnut that Loki would have to be captured in

Halfborn Gunderson = from near Flam in Norway, has a crush on Mallory, is upset when a giant insults his hometown and starts to stomp on it, this anger results in Halfborn killing the giant with minimal help

Hundling = Helgi’s assistant, source of information for Magnus before the quest begins.

Loki = taunting Magnus and his crew in their sleep, declines Magnus’s challenge until another makes him take it

Aegir = God of the sea, wife is Ran, likes microbrewing, the ship Magnus and his crew are on ends up in their mead, has seven daughters

Njord = Magnus’s grandpa, God of Ships/sailing/fishing/trade/navigation and agrees to help the crew have safe sailing up to a point on their journey

Kvesir = mode of God Spit, helps all, was tricked and killed by dwarves

Alderman = Hearth’s dad, cares most about money, had turned into a hideous beast due to his greed and is unwilling to change his ways

Frigg = Queen of Aesir, goddess of foresight & immediate future, helps keeps everything together by being a constant

One thought on “The Ship of the Dead”